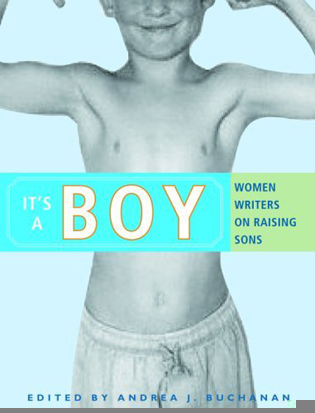 “The Velvet Underground,” in It’s a Boy! Women Writers on Raising Sons

"Thirty essays by writers who are the mothers of sons comprise this collection edited by Andrea J. Buchanan. (Buchanan, herself the mother of a boy and girl, contributed the eponymous essay "It's a Boy!") The essays are divided among four sections, which, briefly put, explore topics related to "prenatal boy apprehension," the "otherness" of boys, gender expectations, and the transition of boys to manhood. Some of the essays are humorous, some poignant, some thoughtful, and readers will undoubtedly have their own favorites. But there really isn't a clunker in the bunch.

Among the more affecting essays in the collection are Susan Ito's "Samuel," about the baby boy she was forced to abort only two weeks before he would have been viable, and Susan O'Doherty's "The Velvet Underground," in which the author chronicles the lesser heartbreak of her son's emotional scarring at the hands of his insensitive playmates."

"I was really taken with pieces by both Susan O'Doherty and Catherine Newman about their sons' love of 'girlish' things."
--Midlife Mama (blog)

Getting Unstuck Without Coming Unglued: A Woman's Guide to Unblocking Creativity
A practical and accessible guidebook to help women overcome creative blocks.

"My Most Memorable Experience" in Sex for America: Politically Inspired Erotica
A teenaged girl's "date" with a small-time political aide goes awry.

“The Road Home,” in About What Was Lost: Twenty Writers on Miscarriage, Healing, and Hope
An account of my experience with a series of miscarriages before the birth of my son.
“The Velvet Underground,” in It’s a Boy! Women Writers on Raising Sons
An exploration of the meaning and consequences of my son’s adoption of some traditionally feminine attributes.
Loading…}